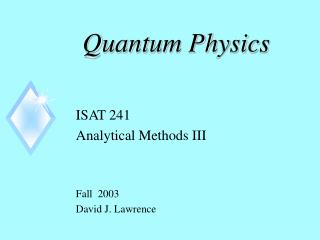 Quantum Physics - . what makes one atom different from another?. the amazing colors produced in fireworks are a result of

QUANTUM PHYSICS - . what is it? a group of scientific theories and studies that at first pretended to find an explanation

Basic Quantum Physics - . photons and their energies. “ light ” previously known as all forms of electromagnetic

Quantum Physics - . objectives: after completing this module, you should be able to:. discuss the meaning of quantum