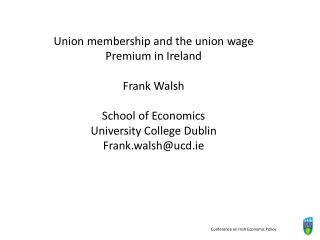 Union membership and the union wage Premium in Ireland Frank Walsh School of Economics University College Dublin Frank.walsh@ucd.ie. Are Trade Unions good or bad for employment and efficiency Theory suggests it depends on: The objective of unions

“College is a match to be made, not a prize to be won.” - Frank Sachs, - Dir. of college counseling, the blake

Labor Law “Reform” – What Form Will It Take? - . clinton s. morse, esq. introduction. why is it suddenly important

The Soviet Union as a Superpower - . chapter 30 (3 of 4). soviet union a world power after ww2. built up military and

The Russian Revolution and the birth of the Soviet Union - Totalitarian government in the soviet union. the russian

James Joyce’s Ireland - . early life. born in 1882 in dublin, ireland he was the oldest of 10 children he attended