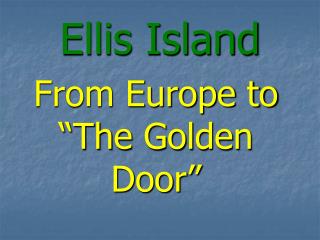 Ellis Island The Golden Door - . stop 1: arrival . new arrivals were taken by ferry to the main building at ellis island.

Ellis Island Simulation - . a simulation involves role playing. you will be playing the role of an immigrant, coming to

Immigration at Ellis island - . by: allie ogden. step 1: the passage. escaping poverty and religious persecution most

MY ELLIS ISLAND EXPERIENCE - . unit 3. where is ellis island ?. ellis island is a small island in new york bay .  it is

ELLIS ISLAND - . from 1892 to 1954, over twelve million immigrants entered the united states through the portal of ellis

Through Ellis Island and Angel Island: The Immigration Experience - . chapter 15 review. what are push factors?. problems

Ellis Island ! - . how do they get there?. they all went in a huge and really big boat, there was really full of

Ellis Island - . ellis island. the island itself was owned by samuel ellis in the 1770s. the war department bought the

When I came to Ellis Island - . group members names go here. traveling to ellis island. tell how you felt coming to ellis