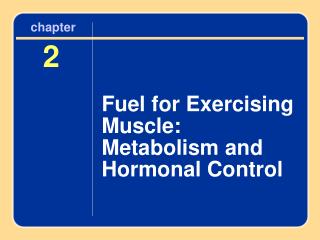 chapter. 2. Fuel for Exercising Muscle: Metabolism and Hormonal Control. Energy for Cellular Activity. Food sources are broken down via catabolism to be used by the cells. Energy is transferred from food sources to ATP via phosphorylation. Muscles and Muscle Tissue - . p a r t a. muscle overview. the three types of muscle tissue are skeletal, cardiac, and

Metabolism - . campbell and reece chapter 8. metabolism. total sum of all chemical reactions in an organism. metabolic