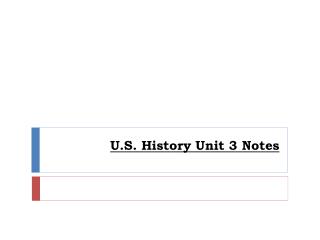 U.S. History Unit 3 Notes. New State Governments. Colonies became states Wrote new constitutions (1 st time in history people had written down the rules under which they would be governed). Forming a Republic . U.S . History Unit 1 Notes - . early colonization and development of the united states. who inhabited it first?. outside

AP U.S. HISTORY Unit 4 Notes - . expansion and reform. focus on when you read:. trace the history of westward expansion

Unit 3 Notes - . a. location and properties of metals and nonmetals. b. periodic trends 1. ionization energy – 2.

Unit 3 Notes - . how markets work. introduction. in a market system, the buyers and sellers interaction determines the

Unit 1 – U.S. History - . first people to arrive in america. no one knows exactly when the first people came to

U.S. History Ch. 11 Notes - . the civil war. 1) although the south had many experienced officers to lead its troops, the

U.S. History Day 3 - . states and capitals, beginnings of the new nation. do now. imagine you lived in a country and a

U.S. History 3/6 - . agenda: assess the decision to build and use the atomic bomb readings and discussion battles in the