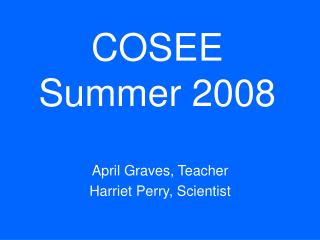 COSEE Summer 2008. April Graves, Teacher Harriet Perry, Scientist. Human Impacts on the Marine Environment. A day in the life of SpongeBob. Importance of Oceans. 97% of the Earth’s surface water is contained in the ocean. Oceans moderate temperature and influence weather. COSEE - . effective networking: why, how and for what? may 4, 2011 jean egmon egmon@kellogg.northwestern.edu. why am

E2K Summer 2008 - . marty wood assistant dean for undergraduate education. what does uconn have to offer?. a carnegie

RIM Summer 2008 - . you’re so quotable! “quotable quotes”. aloha!. welcome to our aloha island. where we

NOHS 2008 Summer Reading - . “the man who does not read good books has no advantage over the man who cannot read