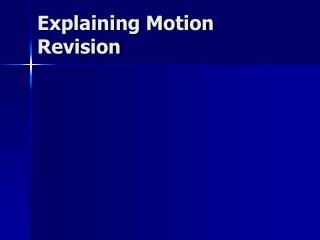 Explaining Motion Revision. Forces. Forces arise from an interaction between 2 objects. In an interaction pair the forces are equal in size but opposite in direction. These forces act on different objects. They explain how rockets work etc. Forces (cont.). P4 Explaining motion - . gcse additional science. ideas that: are important from the perspective of the subject; enable

Explaining motion P4 - . questions/answers. question 1. what is the name used to describe a pair of forces?. answer.

Motion Revision PowerPoint - . this is a good resource to go over quickly as a mental quiz on the major areas of motion

P4 Explaining motion Topics P4.1 How can we describe motion? P4.2 What are forces? - P4.3 what is the connection between

Explaining Punishment - . ( or : ‘introduction to the sociology of punishment’). the marxist tradition. karl marx

Explaining genocide - . 1948 un definition (rafael lemkin ). any of the following acts committed with intent to destroy,