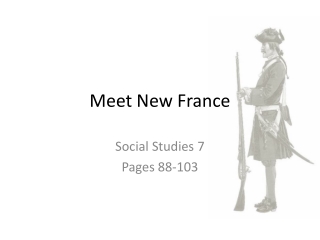 Meet New France. Social Studies 7 Pages 88-103. What was the Social Structure of New France?. People were classified according to levels of importance within the colony. The most important people were born into the ruling class (nobility) Wealthy people were next (merchants were rich) New France - . french settlements in the new world. new france. a settlement is a location established by people

New France Skits - . in a group of 3 or 4, you will create and perform a skit about life in new france. approximately 3