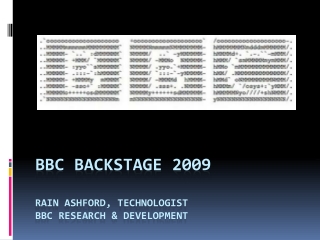 BBC Backstage 2009 Rain Ashford, technologist BBC Research & development. Backstage is run by…. Ian Forrester in Manchester. Rain Ashford in London. What is Backstage and what go we get up to?. the BBC’s developer network encourage & support UK developers BQC – BBC Quiz - . which chapter of the book of mark have we reached in our series on mark’s gospel?. chapter 10 .

BBC - . by: kait anderson. what as the bbc?. the bbc is the   british broadcasting company the bbc was a radio station.

BBC School Report - . by abi, antonia, danielle and nicole. why we are doing this?. we thought this would be a great

What is BBC - . bbc is a british broadcasting corporation. a public service broadcaster in the united kingdom. the