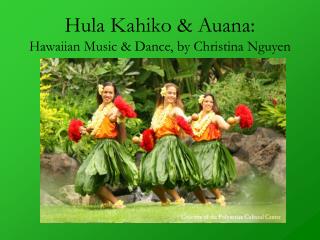 Hula Kahiko & Auana: Hawaiian Music & Dance, by Christina Nguyen. What is hula dancing?. A form of dance developed in the Hawaiian islands, accompanied by song or chant The movements of the body and hands translate or reflect the meaning of the song THE ELEMENTS OF MUSIC - . the building blocks of music. what are the elements of music?. timbre texture silence duration.

WHAT ARE “HOT SPOTS”? - Why are the locations of some volcanoes not associated with tectonic plate boundaries ?. what

Music Therapy - . three main questions. how does music therapy help people to relax? who can benefit from music therapy?

Dance Movement Therapist - . dance movement therapists use movement and dance within a therapeutic environment to help