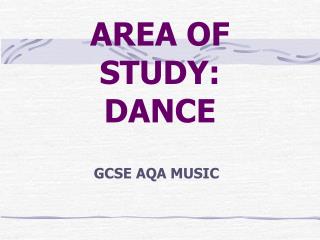 AREA OF STUDY: SPECIAL EVENTS - Gcse music for aqa special events music can be: from the past from the present

Area of Study 1 - . chapter 1: law in society. differences between legal and non-legal rules. rules tell us what we can

Area of Study Imaginative Writing - . compose your own text which shows ideas and attitudes about power and authority use

Area of study 2 - . how old is that fossil?. fossils tell us what kinds of organisms lived in the past, but how do

Creative Writing: Area of Study - . you should develop a two or three different scenarios to do with your concept. they

Area of study 3 - Year 11 revision . area of study 3. listen/ watch all of the youtube videos answer all the questions.

The study area - Using environmental tracers to help calibrate a ground-water model of the middle rio grande basin. the