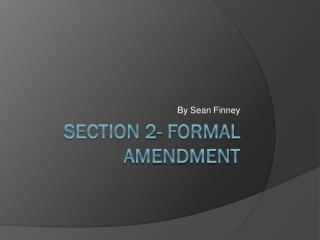 By Sean Finney. Section 2- Formal Amendment. Vocab. Amendment Ratification Formal amendment Bill of Rights. Formal Amendment Process. The Constitution wasn’t perfect from he beginning. This is why we have amendments, or changes.

Informal vs. Formal Language - . when and how to use formal or informal language amanda wieland. but first!. a short

7th Amendment ... - 7th amendment . “in suits at common law, where the value in controversy shall exceed $20, the right

Chapter 3 Section 1: The Six Basic Principles - . the constitution is based on six broad principles: popular sovereignty,