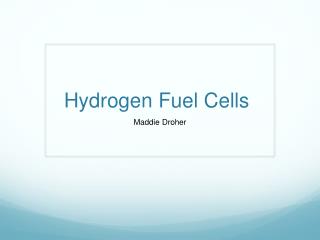 Hydrogen Fuel Cells . Maddie Droher. What is a fuel cell?. An energy conversion device set to replace combustion engines and additional batteries in a number of applications.

Hydrogen and Fuel Cells How is Hydrogen Produced, Delivered, and Stored? - . brought to you by – . hydrogen. energy!.

Fuel cells and hydrogen storage - . by reza enayatollahi student no:095442.