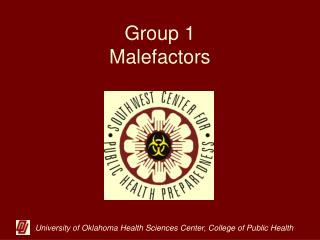 Group 1 Malefactors. Tasks for Group 1. Describe the best candidate agents (chemical and biological) that could be used to attack this system. Why are these preferable? What sorts of physical attacks could be used? What are the best alternatives for: hurting people? spreading fear? Group 1 - . improvement of bike paths with addition of tunnels and bridges. introduction. according to the florida

Group 1 - . anya, aaron &amp; kyi -lyn. orientation. how he is sane him and his wife’s love for animals how him and

Group 1 - . drew koontz abby johnson login english devlin lense. education. i like to write papers, but only for world