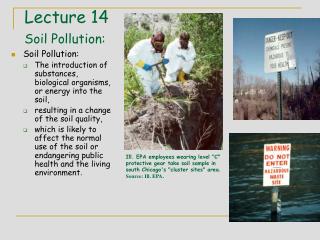 Lecture 14 Soil Pollution:. Soil Pollution: The introduction of substances, biological organisms, or energy into the soil, resulting in a change of the soil quality, which is likely to affect the normal use of the soil or endangering public health and the living environment . Lecture 1b – Soil as a Resource - . what does soil do? soils define culture. throughout history soil has defined human

Environmental Information System for Uzbekistan - . legislation. monitoring of the environmental state. goskomprirod i

Air, Water, and Soil Pollution - . a meta-study conducted in 2007 by david pimentel at cornell university suggests that

Lecture 3a Naming Soil Horizons - . soil horizons (layers in the soil) are named so differences between soils can be