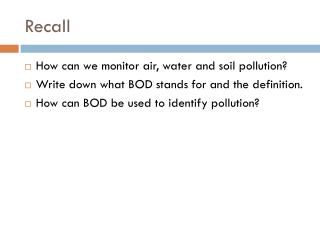 Recall. How can we monitor air, water and soil pollution? Write down what BOD stands for and the definition. How can BOD be used to identify pollution?. Learning outcomes. You should all be able to: Describe an indirect method of measuring pollution levels. Most of you should be able to