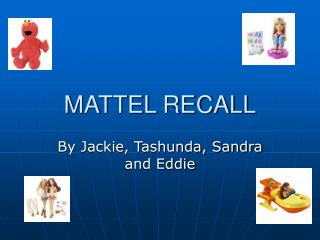 MATTEL RECALL. By Jackie, Tashunda, Sandra and Eddie. Mattel History. In 1945 Ruth and Elliot Handler and Harold “Matt” Masson launched Mattel out of a garage workshop in Southern California. In 1960 Mattel became a publicly owned company. Mattel - Tnc’s - the good and the bad. mattel . by adeeba ahmad and april jane palencia 9d. mattel is born. harold