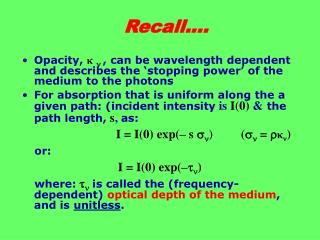 Recall. Opacity, κ  , can be wavelength dependent and describes the ‘stopping power’ of the medium to the photons For absorption that is uniform along the a given path: (incident intensity is I(0) & the path length, s , as: