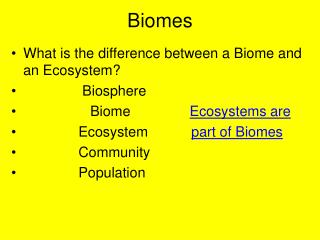 Biomes. What is the difference between a Biome and an Ecosystem? Biosphere Biome Ecosystems are Ecosystem part of Biomes Community Population. Biomes.

Biomes - . terrestrial biomes. what is a biome ?. a biome is a large geographical area of distinctive plant and animal

Biomes - . there are 6 major biomes in the world:. rain forest desert grassland deciduous or temperate forest

biomes - . by james parker p.6. desert. the desert’s climate is very hot. hardly any rain about two inches a year. the

Biomes - . what is a biome?. biome is a large region of land that has a specific climate and certain plant and animal

Biomes - . a look at biomes of the world. biogeography. biogeography – the study of where organisms live. alfred