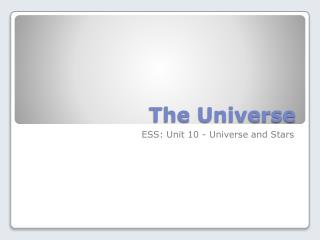 The Universe. ESS: Unit 10 - Universe and Stars. Astronomers refer to all of the matter and energy in space as the UNIVERSE . Includes : Solar system Stars All other objects in space. The Universe. Chapter 15 A Universe of Galaxies - . in this chapter we will see: what are the three types of galaxies? how do we

Sensation and Perception - . “ everything you see or hear or experience in any way at all is specific to you. you

Physics Observing The Universe - . revision. observing the sky with the naked eye. movement of celestial bodies. the sun

Theories on the Origin of the Universe - . introduction. theory a coherent group of tested general propositions

A walk through the Universe - . space is big. you just won’t believe how vastly, hugely, mind-bogglingly big it is. i