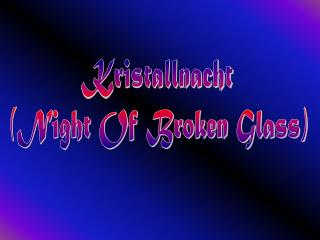 Kristallnacht (Night Of Broken Glass) - . what was

Leni Riefenstahl, Triumph of the Will (1935) - . posters from british empire marketing board (1930s). after kristallnacht

November 1938 - . “the night of broken glass” a pogrom of hate and violence

The Holocaust - . genocide of the jews before and during world war ii. kristallnacht-crystal night. the night of the

The Holocaust - . the holocaust. holocaust = mass murder of people by nazi’s aryans = nazi’s claim they are the