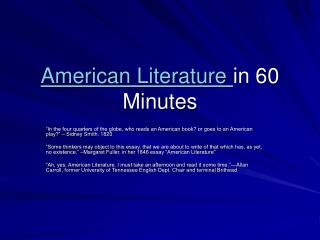 American Literature in 60 Minutes. “In the four quarters of the globe, who reads an American book? or goes to an American play?” – Sidney Smith, 1820 60 Gadgets in 60 Minutes - Or how many gadgets can i take before my mind blows up? barbara fullerton, manager of

Antennas -- in 60 Minutes or Less! - . cynthia furse department of electrical and computer engineering university of utah

This is a 60 in 60 Challenge: 60 questions in 60 minutes - Some are designated as calc active. the expectation is that

60 + Chrome Apps and Extensions in 60 Minutes - . timer. set a countdown for students or yourself. 1. omnibox timer. set