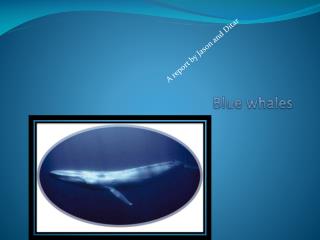 Blue whales. A report by Jason and Ditar. FAMILY LIFE . A female blue whale gives birth to one calf every 2-3 years. Whales start calving between age 6 and 10,baby’s are 8 meters long when born and weigh about four tons.

WHALES - . created by grace . whales migrate because there cold water areas freeze over. a bowe headed whale can grow

Blue whales - . by noah. they have small eyes. they weigh 30 elephants. they live in antaretica.

Whales - . whales are endangered because p eople hunted whales for their

Whales - . by: jenny tran. blue whale. the blue whale is the largest living animal. it is an endangered species, and can

Whales and their Adaptations - . by: mehak. introduction. big, cute, and blue! have you ever seen a whale? here are some

Indangered whales - . the reason why whales are in dangered is because every year some one or something kills those sweet

Whales by temaia - . you are now about to enter the world of whales have a nice trip. killer

All About Blue Whales! - . by : michelle mr s anderson 4th. all about blue whales!. whales are huge swimming mammals.

World of Whales - . research unit march 2003. what makes whales different from fish? what are the different kinds of

Should whaling continue - Stop whaling. in this powerpoint there will be reasons why we think whaling should stop. . this