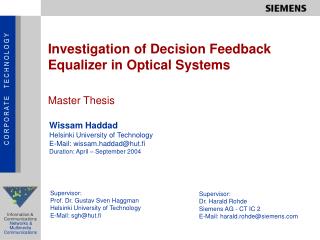 Optical systems - . hecht 5.7 wednesday october 2, 2002. field stop. the aperture that controls the field of view by

“Budgeting” of Optical Systems - . a tutorial on optomechanical tolerancing and a synopsis of the economics involved

EQUALIZER INTERNATIONAL - . presentation to: equalizer ltd, russia. 23 august 2007. agenda. who we are what we do our

Feedback Systems In The Body - Feedback system. a feedback system is a cycle of events in which information about the