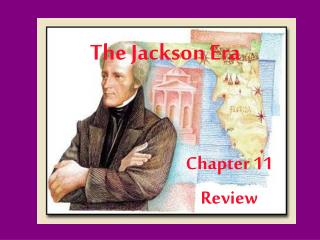 The Jackson Era. Chapter 11 Review. Who were the four candidates who ran for President in 1824? Where were they from?. John Quincy Adams, New England Henry Clay, Kentucky Andrew Jackson, Tennessee William Crawford, The South. Who won the popular vote for election in 1824?. Andrew Jackson Era 2 - . objectives. evaluate the significance of the debate over tariffs and the idea of nullification.

The Jackson Five - . and friends. cath. with a rosy cheeked dot. viki. very fashionable!. viki. with john at butlins.

The Jackson Bog - . by: prof. tammy bixler. the jackson bog. the bog is located on fulton road just behind jackson high

The Jackson Five - . john doe - 8a. purpose: to recognize the contributions of those who have had a significant impact on

Jackson - . aim : did jackson overstep the boundaries of his office?. “ king andrew ”. how does this cartoon portray

Jackson - They let us on the white house lawn. there was whiskey, kegs of beer and song. jackson. they let us inside and