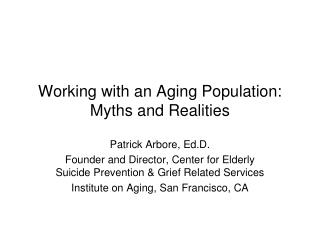 Working with an Aging Population: Myths and Realities Working with an Aging Population: Myths and Realities

Sleep and Aging - . meredith broderick, md april 2, 2008. sleep and aging. how does sleep change as we age? do we need

The Journey to Integrated Mental Health/Aging Systems of Care - Presented by lee fraser, ma, rnc, qmhp recognized by the