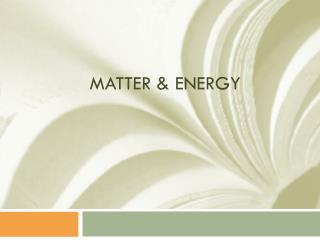 MATTER & Energy. MATTER: the stuff of the universe. Matter. Matter : anything that takes up space and has mass Mass : the amount of “stuff” in an object Weight : gravity’s pull on mass on Earth, this is the same as mass

Matter: - . it’s what the world’s made of. chemistry studies matter- branches of chemistry. organic study of most