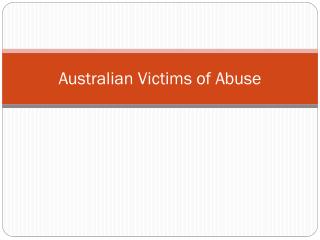 Australian Victims of Abuse. History of Abuse. The Native Australians, Aborigine's or the original inhabitants, suffered greatly by European settlement. INTERVIEWING CHILDREN WHO HAVE BEEN VICTIMS OF SEXUAL ABUSE: - Fpp birmingham april 2019. interviewing children who have

India Sexual Abuse : "Number Of Child Victims Every Hour" - "child sexual abuse has been in focus in

THE DISCLOSURE PROCESS AMONG VICTIMS OF CHILD SEXUAL ABUSE - . disclosure, delay and denial. questions about the

OKEx CEO lends support to Australian Fire Victims - The ceo of okex,u00a0jay hao, has come forward to provide his support

Victims of migration - . analysis of the situation of moroccan women, whose husbands have emigrated to italy. case study:

Victims of Trafficking - International and norwegian perspectives on how to identify, assist and register. oslo, 09-10