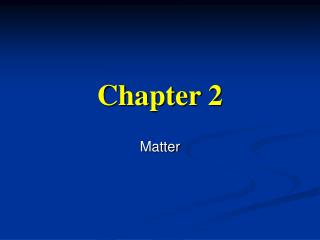 Chapter 2. Matter. Chemistry. The study of matter and how it changes Matter – anything that has mass and takes up space Mass – resistance to change in motion Two types of matter- Substance- Pure Mixture- more than one substance. Two Kinds of Substances.