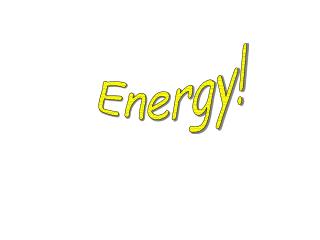 Energy!. Brainstorm Energy. ENERGY. 7 Forms of Energy. Heat Chemical Light Electrical Mechanical Sound Nuclear. Energy. The ability to do work Involves either motion or position There are many different types of energy ENERGY RESOURCES - . what is energy?. the ability to do work. we use energy to do a lot here’s the breakdown of how

ENERGY RESOURCES - . where does our energy come from?. can energy be “made”?. the 1 st law of thermodynamics says