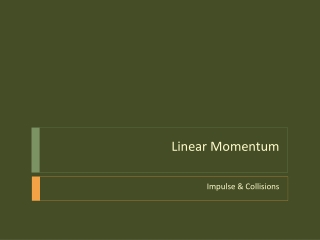 Linear Momentum. Impulse & Collisions. What is momentum?. Momentum is a measure of how hard it is to stop or turn a moving object. What characteristics of an object would make it hard to stop or turn? Mass Velocity. Which has more momentum?. Calculating Momentum. For one particle Momentum Conservation - . conservation of linear momentum. the net force acting on an object is the rate of change of its

Linear Momentum - . why is more force needed to stop a train than a car if both travel at the same speed? why does a

Momentum - . an object of mass m traveling at velocity has a linear momentum (or just momentum), , given by units have

Chapter 7 Linear Momentum - . units of chapter 7. momentum and its relation to force conservation of momentum collisions

PRINCIPLE OF LINEAR IMPULSE AND MOMENTUM - . today’s objectives : students will be able to: calculate the linear