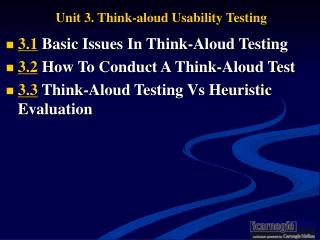 Think Aloud Usability Testing - What is usability?. usability is the measure of the quality of a user's experience when

THINK-ALOUD - . first. i’m going to think aloud as i read. i want to help you understand how i read word problems. i

What Do Usability Evaluators Do in Practice ? An Explorative Study of Think-Aloud Testing - . 14 tænke højt test  7

Usability Testing - . david rashty. &quot;i find that a great part of the information i have was acquired by