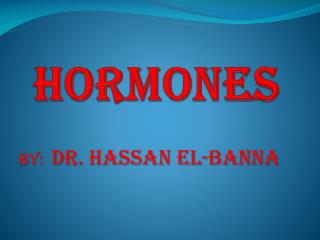 Hormones. By: dr. hassan el- banna. What is a Hormone?. A hormone is a chemical substance released by a cell or a gland in one part of the body that sends out messages that affect cells in other parts of the organism. The Endocrine System . Hormones - . biochemistry. classification of hormones. diversity in the storage of hormones. comparison of receptors

HORMONES - . ‛ ormh ( hormae), an impetus or stimulus. outline. • overview (not quite the big picture) •

Hormones - . are one of the many ways our body’s cells “talk” to each other. are produced by specialized glands

Hormones - . a hormone is a chemical released by a cell or a gland in one part of the body that sends out messages that

Hormones - . written by jyc alone. hormone production. what causes the release of hormones? nerve impulses from the

Hormones - . chemical substances produced in small quantities in one part of an organism and then transported to another

Hormones - . by alexa lazar. hormone - a chemical substance secreted by an endocrine gland or group of endocrine cells

Hormones - . noadswood science, 2011. hormones. to know how hormones are used in the body, and how these control the

Hormones - . can laughing actually improve your health? emma guidi. did you feel nervous?. you’re not alone. about 86%