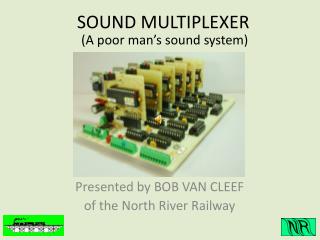 SOUND MULTIPLEXER (A poor man’s sound system). Presented by BOB VAN CLEEF of the North River Railway. Sawmill at Timberly. Let’s say you are switching out the Saw mill. Your locomotive has sound but can you hear the whine of the saws or the flow of the water?. Roundhouse at Harrietta. History Vocabulary - . a guide to pronunciation. the sound of schwa. please note that schwa (shwah) is the most common

How Is Sound Produced? - . tweeters use corona discharge to produce sound corona is produced by dielectric breakdown of

Waves and Sound - . intro. a. pick up your notes and worksheet packets b. write the following questions on a blank piece

Chapter 10: WAVES AND SOUND - . this lecture will help you understand:. vibrations and waves wave motion transverse and