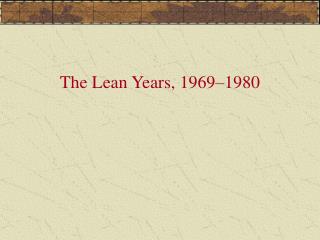 The Lean Years, 1969–1980. How and why did America experience a severe economic crisis in the 1970s? What effect did Nixon’s presidency have on domestic politics? How did expanding social activism lead to a conservative reaction at the end of the decade? The Lean Startup - This is part of the deck i used in the lean startup workshop here in the philippines. know how to

Lean Six Sigma Green Belt Training - . a. workshop goals. this workshop will help you learn to: implement a systematic