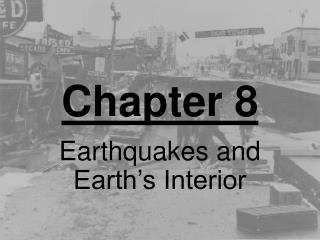 Chapter 8. Earthquakes and Earth’s Interior. What is an earthquake?. An earthquake is the vibration of Earth produced by the rapid release of energy. Example: 1906 San Francisco Earthquake. Earthquakes usually occur when rocks under stress suddenly shift along a fault.