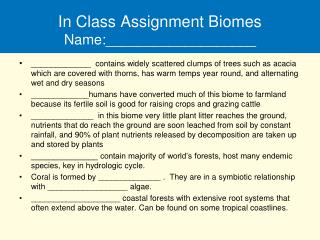 biomes and aquatic ecosystems - Learning objectives. what are biomes?what major factors account for their

The World of Biomes - . ryan lindsey. popi ledbetter. hello . we are about to take a trip to see all the world’s biomes

World Biomes - . on your map identify where malawi is. as you read the chapters assigned to you write down the biomes

4-3 Biomes Environments are grouped into BIOMES - Group of ecosystems that have same climate &amp; dominant

Biomes of the World - . ecologists group the ecosystems into larger areas known as biomes. a biome is a group of

O cean Biomes - . michael manderson. what is a ocean biomes. - ocean is the largest ecosystem in the world covering over

Biomes - . biomes and water biomes. biome: is a large group of ecosystems that share the same type of climax community.