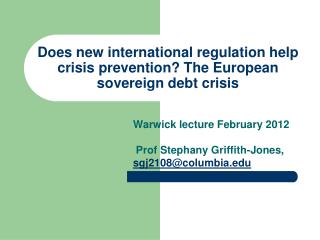 Facing the Media - . a course to prepare cdc spokespersons for crisis and emergency situations . introduction and

The Obama Presidency - . the obama vote the economic crisis obama’s domestic policies. from bush 2004 to obama 2008.

The Role of Financial Derivatives In The Origin And Spreading of the Subprime Crisis - . elisa parisi-capone. content.

Crisis Intervention Plan - . enable the individual to:. prevent a crisis self-manage a crisis alleviate a crisis end the