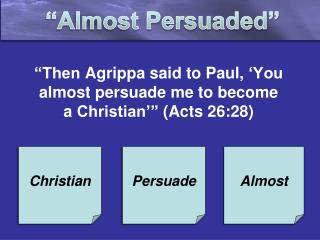 Almost Persuaded - Acts 26:27-29. 27king agrippa, believest thou the prophets? i know that thou believest. 28then agrippa

ALMOST LOST - . “now ‘if the righteous one is scarcely saved, where will the ungodly and the sinner appear ?’” (1

The Almost Christian - . “agrippa replied to paul, in a short time you will persuade me to become a christian” (acts

The Almost Famous Amos - . by jeri amos (music by john mellencamp “small town”). we are family. born in antioch,

Graduation is almost here! - . leave something to be remembered by. senior

After being persuaded to kill Duncan… - . macbeth has a brief discussion with fleance , banquo’s son there is then