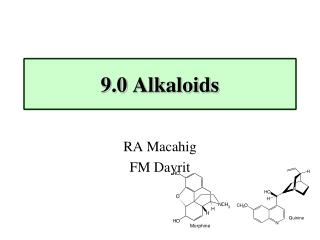 ALKALOIDS - . alkaloid: difficult to define no definitive difference between an alkaloid and naturally occurring complex

ALKALOIDS - Alkaloid ?????????. alkaloids: plant derived, are alkali and contain at least one n2-atom. they also normally

Alkaloids - . syllabus: alkaloids: the details of the followings: biosynthesis of tropane, quinoline, isoquinoline and

Isoquinoline Alkaloids - . opium alkaloids. many alkaloids have been identified in opium latex (opiates) - maybe as many