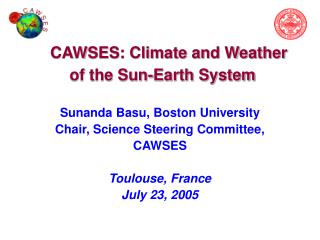 CHAPTER 15 THE EARTH’S CHANGING CLIMATE - . weather vs. climate. in the simplest terms, climate is the average of the

05th September, 2009. At Workshop on Climate Change, Environment Management - Climate vs weather. what is climate?climate

What causes the Climate and Seasons? - . climate . climate: the long term weather patterns of an area weather: the

Climate Science - . the climate system and the greenhouse effect. skeptics and deniers. a synoptic view of the earth’s

Weather - . what is weather. the state of the atmosphere often described as measured values of wind speed, temperature,

Chapter 4 - . ecosystems and communities. ch 4.1 . objectives differentiate between weather and climate identify the

Weather &amp; Climate - . today’s focus:. what are the differences between weather and climate ? understanding the

Weather and Climate - . how does the sun affect earth’s atmosphere? how does atmospheric pressure distribute energy?

Weather Dynamics - . a closer look at earth. section 13.1. the main components of earth that influence weather are: the

Earth’s Weather and Climate - . weather the condition of the atmosphere at a certain time and place. changes daily

CAWSES and This Meeting - . four themes under cawses. solar influence on climate. space weather: science and

Weather - . earth’s turbulent and changing climate. weather. what is weather? weather is what the air is like in any