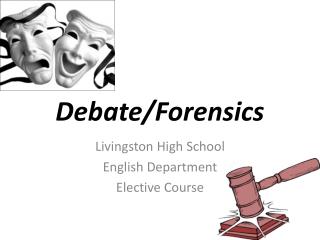 THE GREAT DEBATE! - . debate topic a. should reproductive technology continue to be explored and implemented using

Welcome to the forensic team - . speech, debate and competitive acting. what is forensics?. the word, “forensics,” is

What is Forensics? - . the application of science to law. in other words, applying the knowledge and technology of

Part 11 Drinker Beware! - . select proverbs on the drunkard and intoxication. introduction. wine is a mocker, strong

PUBLIC FORUM DEBATE - . agenda. what is debate? why should i debate? how could the debate team operate? what will happen

Digital Evidence Incident Response and Computer Forensics - . the search for truth is in one way hard and in another easy