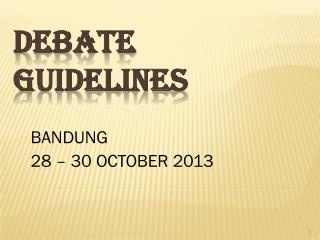 BANDUNG 2 8 – 30 OCTOBER 201 3. DEBATE GUIDELINES. Debat e is a clash of arguments Debate is about speaking, listening, and respect differences Debate is to give your opinion about several issues, pros-cons Debate is using a system, unless it will be “ debat kusir ”. DEBATE IN GENERAL. Debate - . “the best argument is the most convincing argument.”. debate structure. sample debate topic: should gsis

Debate - Dr. seals computer ethics comp4730. debate. what is debate?. a debate is a contest, or, perhaps, like a game,

Debate - . terms. debate: formalized public speaking in which participants prepare and present speeches on opposite sides

Debate - . how to start a debate ?. debate is. take opposing positions on an issue and attempt to persuade a judge

Debate - . things to know about. requirements of the class. novice: 2 tournaments 3 tournaments (a) advanced 4

DEBATE - . bartu açıkgöz. definition:. (a) serious discussion of a subject in which many people take  part.

DEBATE - . proposition – the health service should not provide follow on services for life for tya cancer sufferers.