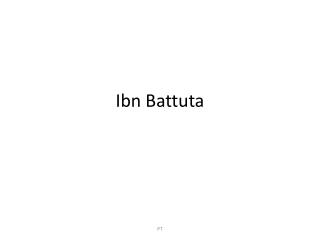 Kenya - . 1498 to present. foreign visitors. 1331— ibn battuta from morocco visited mombasa for one night and said the

Ibn Battuta on the steppes and in India - . carl ernst introduction to islamic civilization. a mongol princess. princess

Class discussion - Quaestio : are the travels of ibn battuta worth studying? nunc agenda : take out your reading from

Abu Abdullah Muhammad Ibn Battuta - . integration of civilizations. the classical period. the civilizations of the