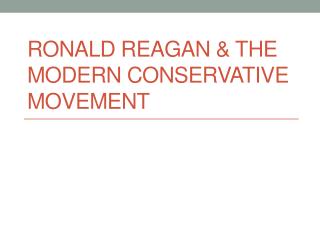 Ronald Reagan & the Modern Conservative Movement. Background. Born in Illinois in 1911 Former actor Former Liberal Switched to the Conservative party after HUAC in the late 50’s Gained notoriety in his support of Barry Goldwater in 1964 Chapter 28 Muscular Movement and Support - . striated muscle. movement is a displacement from one point to another, and

Chapter 1 - . safety and health movement then and now. major topics. developments before the industrial revolution.

Enzymes - . 1. it's true hard work never killed anybody, but i figure, why take the chance? ronald reagan . enzymes

The Progressive Movement - . a major purpose of the progressive movement (1900–1917) was to (1) stimulate the economy