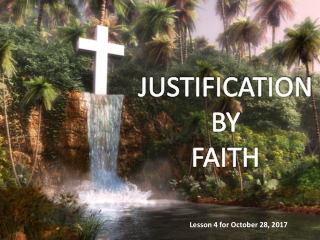 JUSTIFICATION BY FAITH ALONE - . lesson 4 for october 22, 2011. the path to justification. which is the right path?.

JUSTIFICATION SALVATION IS BY GRACE THROUGH FAITH - . what do presbyterians believe ? university presbyterian church

Paul on Justification, Faith &amp; Law - . there are conflicting and confusing statements in the english bible on the

By Faith - . by faith we see the hand of god in the light of creation's grand design in the lives of those who prove

JUSTIFICATION - . justification. “1. to prove or show to be just, or conformable to law, right, justice, propriety, or

JUSTIFICATION - . a topic study in romans. 1) the need of justification. romans 3:10-we lack the righteousness we need.

Saved By Faith, But Not By Faith Only - . the false teaching of men – the error they teach – has terrible

BY FAITH JOSEPH - . joseph stands as an example having faith even when many people treat you wrongfully. joseph should

Forward by Faith - . joshua 3-4 chapter 4. book of joshua – the victory of faith and the glory that comes to god