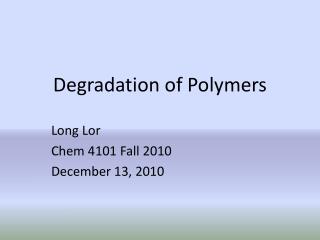 Biodegradable Polymers: Chemistry, Degradation and Applications - . what is polymer degradation?. polymers were

Biodegradable Polymers: Chemistry, Degradation and Applications - . what is polymer degradation?. polymers were

Polymers History of Polymers - . a plastic material is one that is easily shaped and takes on a permanent set. the term

degradation of drugs - Https://protac.bocsci.com/ as a leading service provider in drug discovery and research, boc

“Degradation” - . goals: to start thinking mechanistically about what controls degradation (and thus preservation) of