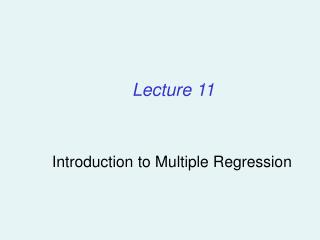 3.3 Hypothesis Testing in Multiple Linear Regression - . questions: what is the overall adequacy of the model? which

The Multiple Regression Model - . chapter contents. 5.1 introduction 5.2 estimating the parameters of the multiple

Introduction to Linear Regression and Correlation Analysis - . goals. after this, you should be able to: calculate and

Chapter 3 - . a brief overview of the classical linear regression model. regression. regression is probably the single