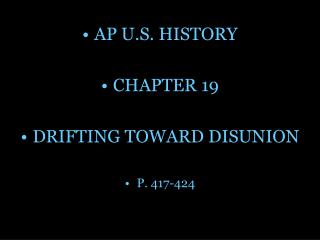 AP U.S. HISTORY CHAPTER 19 DRIFTING TOWARD DISUNION P. 417-424. The Electoral Fruits of 1856. Buchanan won because there were doubts about Fremont’s honesty, capacity, and sound judgment. Perhaps it was better that he did, considering Fremont was not as mentally strong as Lincoln. Drifting Toward Disunion - . 1854-1861 a house divided against itself cannot stand. i believe this government cannot

Drifting Toward Disunion - . chapter 19. essential question?. to what extent did differing opinions on slavery as well as