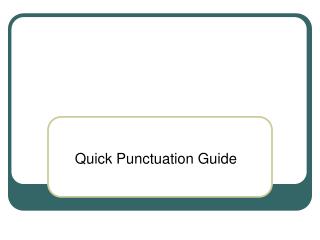 Quick Punctuation Guide . Comma. Use before a coordinating conjunction linking main clauses following introductory clauses and phrases between items in a series to set off incidental comments (appositives, nonrestrictive clauses) when meaning is unclear without its use Study Guide: Punctuation - . 1-4. list the relative pronouns:  who, whom, whose, that, which, whoever, whomever,

Quick Guide - . for clinicians based on tip 9 assessment and treatment of patients with coexisting mental illness and

Quick Reference Guide - Ofl2go utility to copy otdr trace files from an ofl250 or ofl280 to a pc, with fiber folders